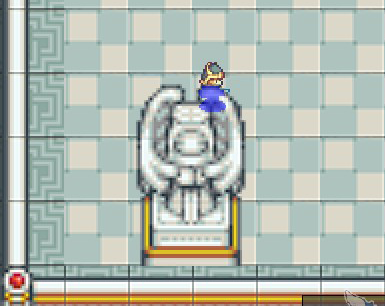 The latest Zimventure, Dungeon Rustlers, is a video game that I’ve been co-developing with my friend Derrick Schommer. We used Game Maker Studio 2 for the development platform. It has many useful features and one in particular we’ll talk about today: custom shaders.
In Dungeon Rustlers, I wanted the player to still be able to see sprites when they were behind certain tiles. Within a level, there were tiles that the player and enemies could walk behind – such as pillars. In addition, some levels have multiple tiers with the possibility for catwalks covering lower tiers.

So, what is the problem we’re trying to solve?  When the player (or any NPC) walks “behind” something in the level, we’d like see a silhouette rather than nothing. Here’s an example of the problem, notice how the player disappears behind the statues.

Not cool! We want to be able to see that the player is behind the statue.

Silhouettes, Surfaces and Shaders – Oh My!

The core goal of this idea is to NOT draw pixels of the occluded sprite and instead, draw some type of silhouette. We pull this off using the following steps:

If you aren’t familiar with surfaces in GameMaker Stuido – I highly suggest you get acquainted with them before continuing any further.

Each game step, every tile which can occlude other objects, will need to render itself to a special surface – the occlusion surface.
The occlusion surface is allocated at the start of the room and is the size of the application surface. A reference to the surface is stored in a global variable because it will be referenced by other objects in random code locations. For Dungeon Rustlers, I used a persistent “game manger” object which handles this type of global work.
Note to self: Wrapping this in scripts would be a nice bit of cleanup work!

Wherever you create the occlusion surface, also create a parameter which will allow binding the occlusion surface to a shader variable. In this example, shader_silhouette is our shader, and u_OcclusionMask is the name of the sampler2D variable that is defined in the shader.

Each game cycle, the occlusion surface will need to be cleared. This happens in the pre-draw event.

Each tilemap that is capable of occluding an actor must render itself to the occlusion map.

Note that you may have specific tilemaps which are capable of performing occlusion (we did in Dungeon Rustlers). If that’s the case, the following magic will work:

In both of the examples above, you’ll note that the location where the sprite and tilemap is drawn is offset by the current camera location. Tilemaps are an all-or-nothing drawing proposition, so they always start at 0,0 as the initial draw point. Object sprites, however, will start with their current world coordinates (x,y) as origin for drawing.

Not sure if your occlusion map is being created properly? Draw it on-screen to find out! Add the following code to your Draw GUI event (I used my Game Manager object’s Draw GUI) to see the surface in real-time.

Now that we have a surface to mask against, it’s time to create a surface of actors. Much like the occlusion surface, the actor surface is managed with a global variable. It’s cleared each game step and every object that can be occluded will draw itself to it.
In the room start – create the surface:

In the pre-draw event, clear the surface:

In the draw event for each actor:

You’ll note that in this draw event, we’re setting the fog parameter prior to drawing the sprite. The fog will actually be used as the silhouette color.
The same debugging tip applies for the actor surface as the occlusion surface. Just be sure to render it on a different part of the screen!

Let’s take a look at the surfaces we now have to work with. Below is a snapshot of three surfaces: The application surface, the occolusion surface, and the actor surface.

Each game cycle, the silhouette shader must be executed, blending the occlusion and actor surfaces which will then be rendered on top of the application surface. This occurs in our game’s persistent “manager object”.
IMPORTANT NOTE: The game manager object’s depth value should be as LOW as possible to ensure it’s the last object that GameMaker draws in the render cycle.
Here is the code which activates the shader and mixes the two surfaces.

Remember, our goal here is to only render a pixel from the actor surface if the same pixel on the occlusion surface has an alpha greater than zero. Why do we subtract 1.5 from the difference between the alpha component of the two surfaces? The reason is that we want the output alpha to be semi-transparent. If only 1.0 was subtracted, the output would be zero or one. That would still work, but the silhouette would be drawn completely opaque and we wouldn’t see any of the statue. By using 1.5, the silhouette is semi-transparent and appears to be “under” the statue.

If everything goes as planned, at this point you should be walking behind tiles with your fancy new silhouette! You’ll see in the example below that this method does indeed offer pixel-perfect occlusion.

There is obviously some overhead to this technique but it’s quite minimal.

The first step is VERY dependent on how you implement the occlusion map. In Dungeon Rustlers, we actually used tilemap collisions rather than object-to-object collisions for the room geometry. This means each cycle I drew tilemaps to the occlusion surface rather than individual objects.
There were no such shortcuts for rendering actors to the actor surface. Each actor simply draws itself twice. This isn’t a HUGE deal though as GameMaker doesn’t call the draw event for objects which are off-screen.

For memory consumption, my technique adds two additional surfaces, which are the size of the application surface. If this is a deal-breaker, it’s time to upgrade your computer!

If you found this tutorial useful, please stop by Steam and check out our game, Dungeon Rustlers! If you’ve got any question about this tutorial and how to use it in your game, get in touch via Twitter or use the contact page to send me an email! 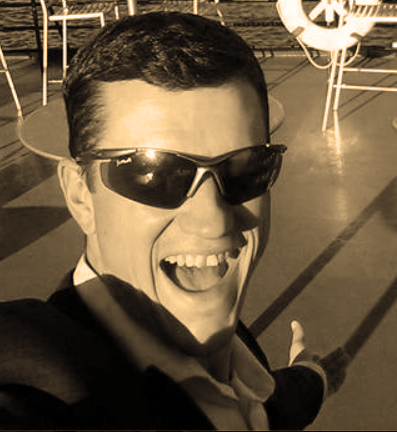